So, server-blade inspired design, and rapid prototyped intentions are all well and good, but how did things actually come together? 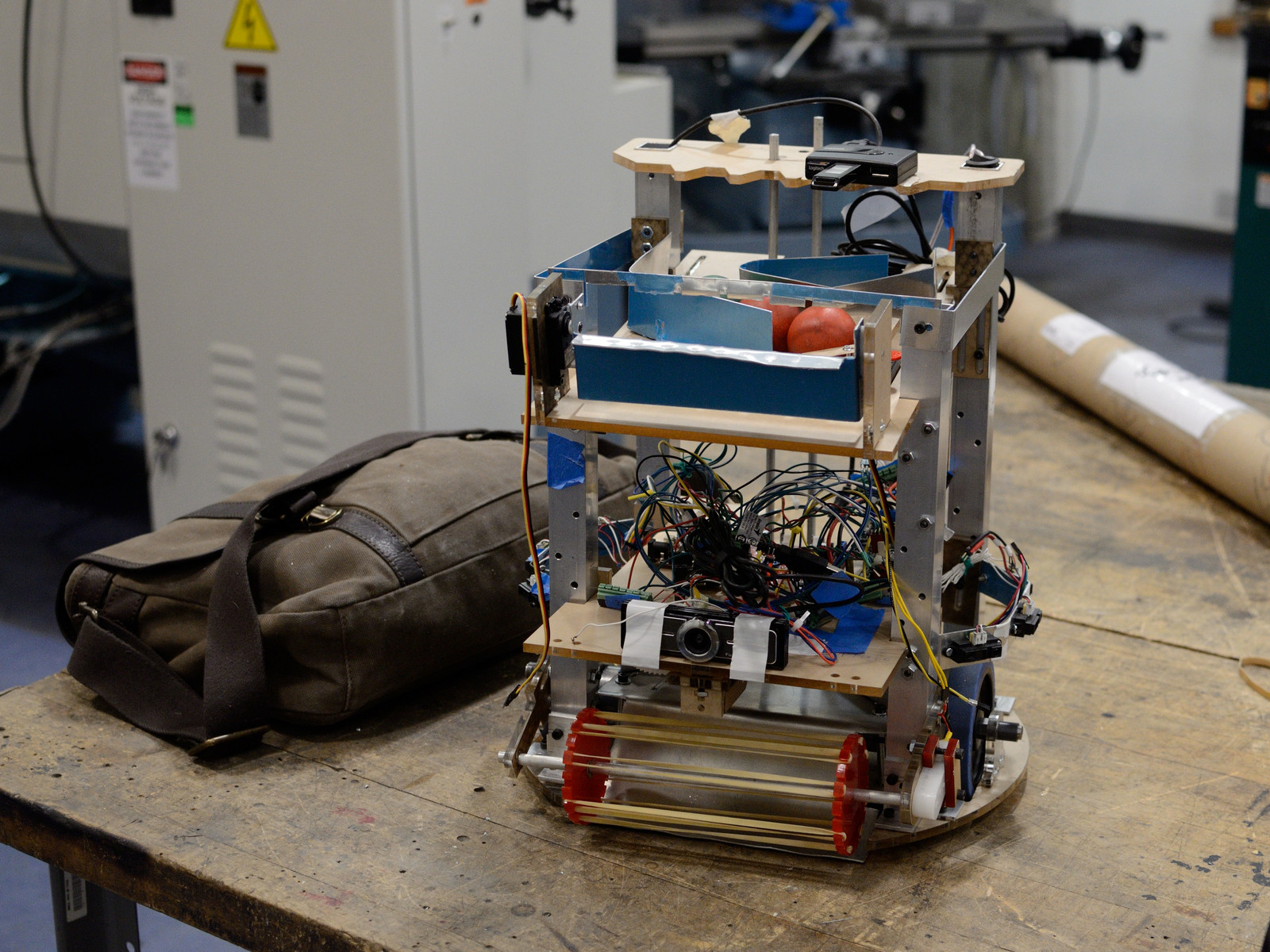 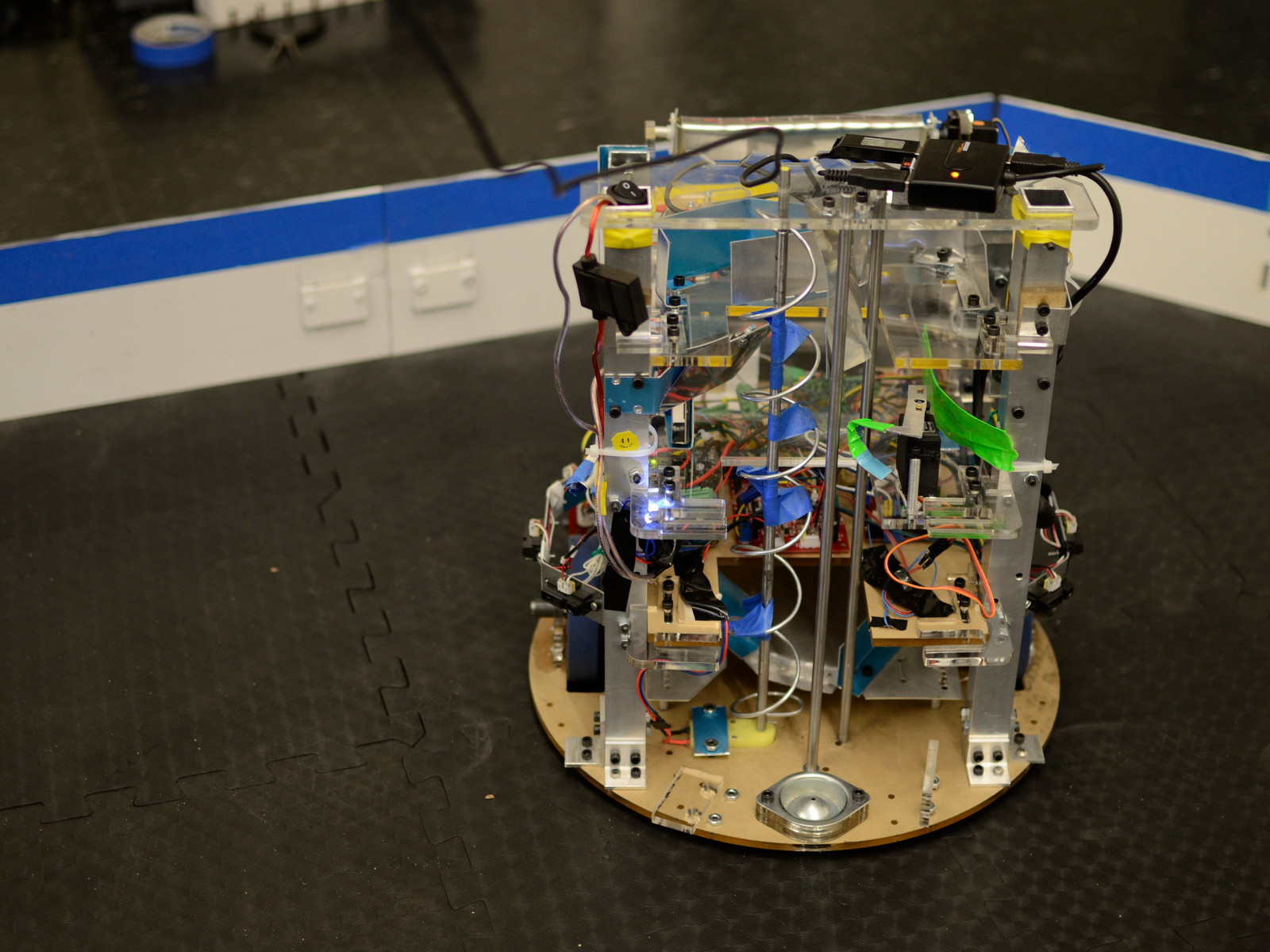 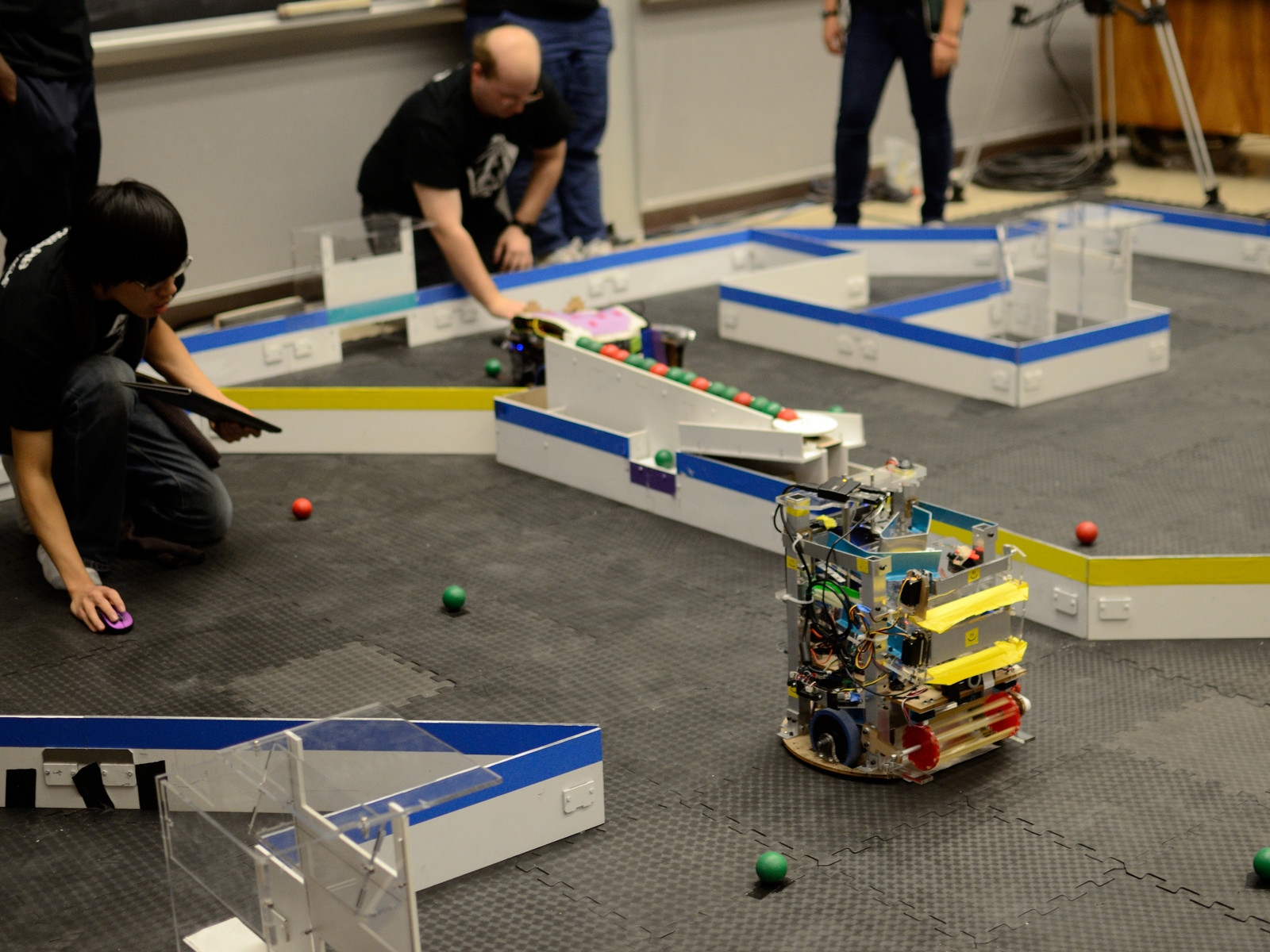 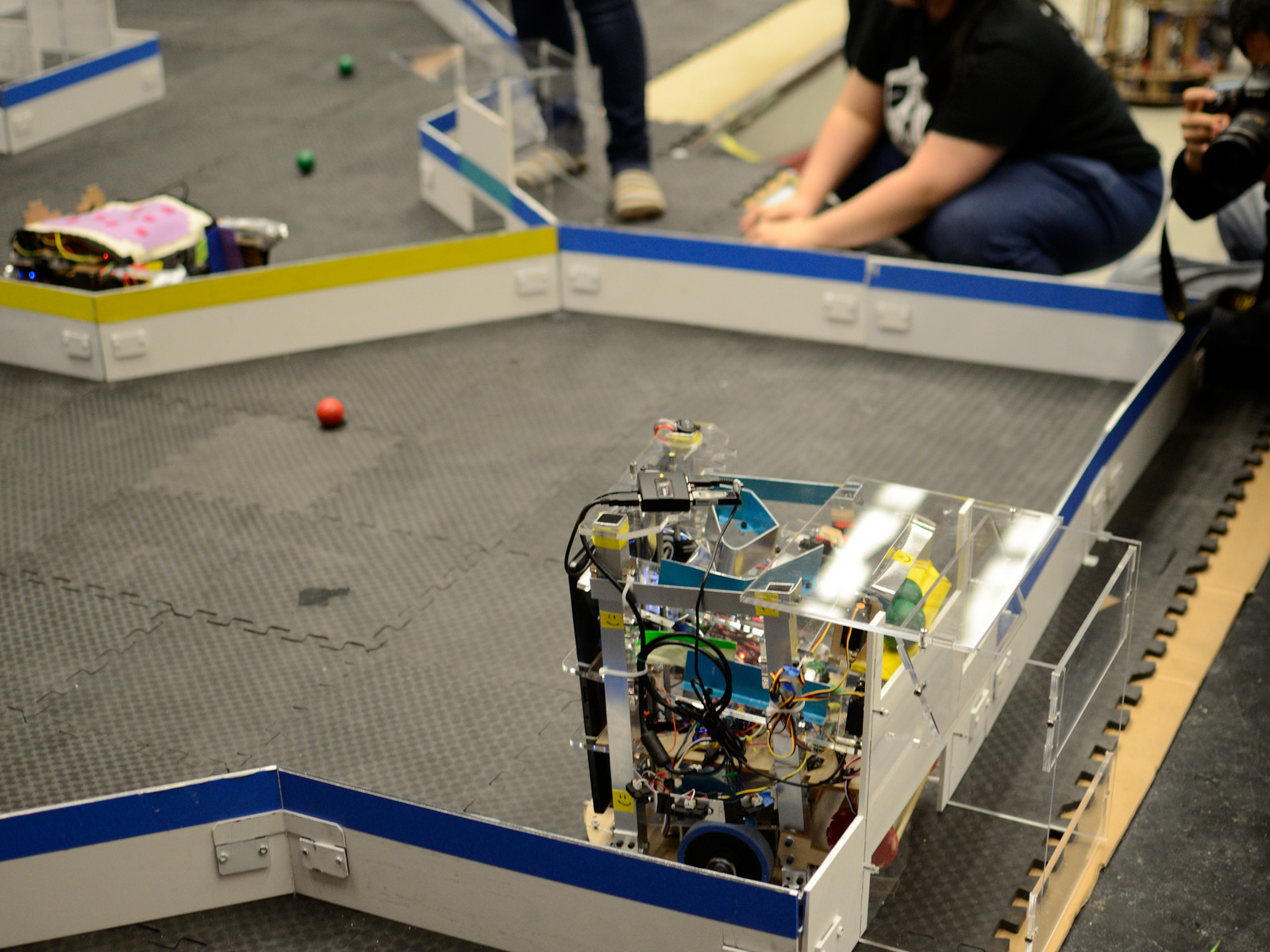 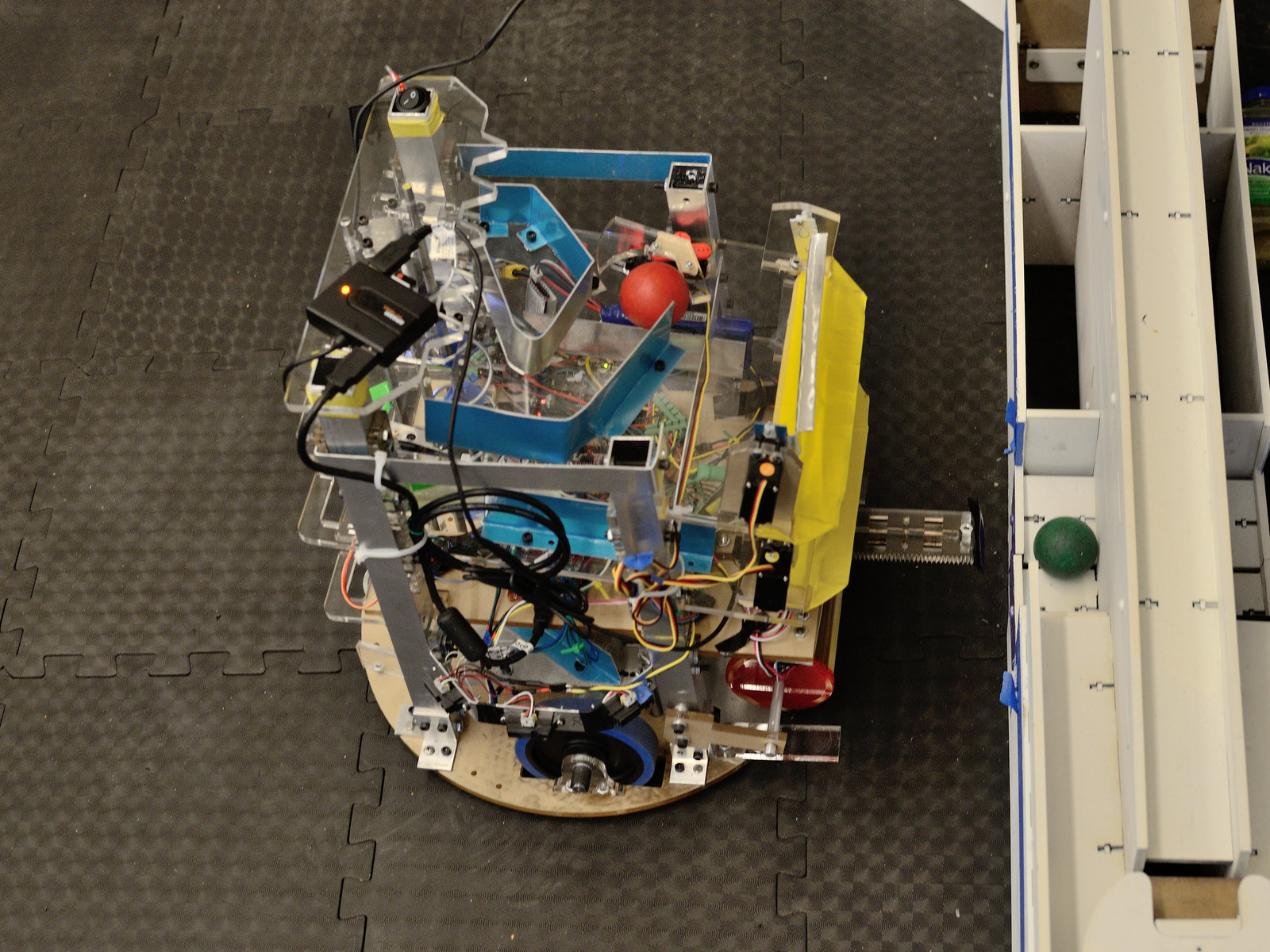 Overall, we came in third place! ROS hard a bit of a hard time localizing on the time scale we had to work with, but we had more than one successful ball drop at the “energy silos.” The mechanics worked beautifully! The only failure was our extremely risky ball-gripper design, essentially a ramrod with sticky tape at the end, which got jammed after the supplied motor’s plastic gearbox had had enough.

__This page is a work in progress, come back soon!__

While I’m on a long bus ride from JPL to Goldstone to visit the satellite compound for the Deep Space Network, I figure I should catch up on some blog entries! 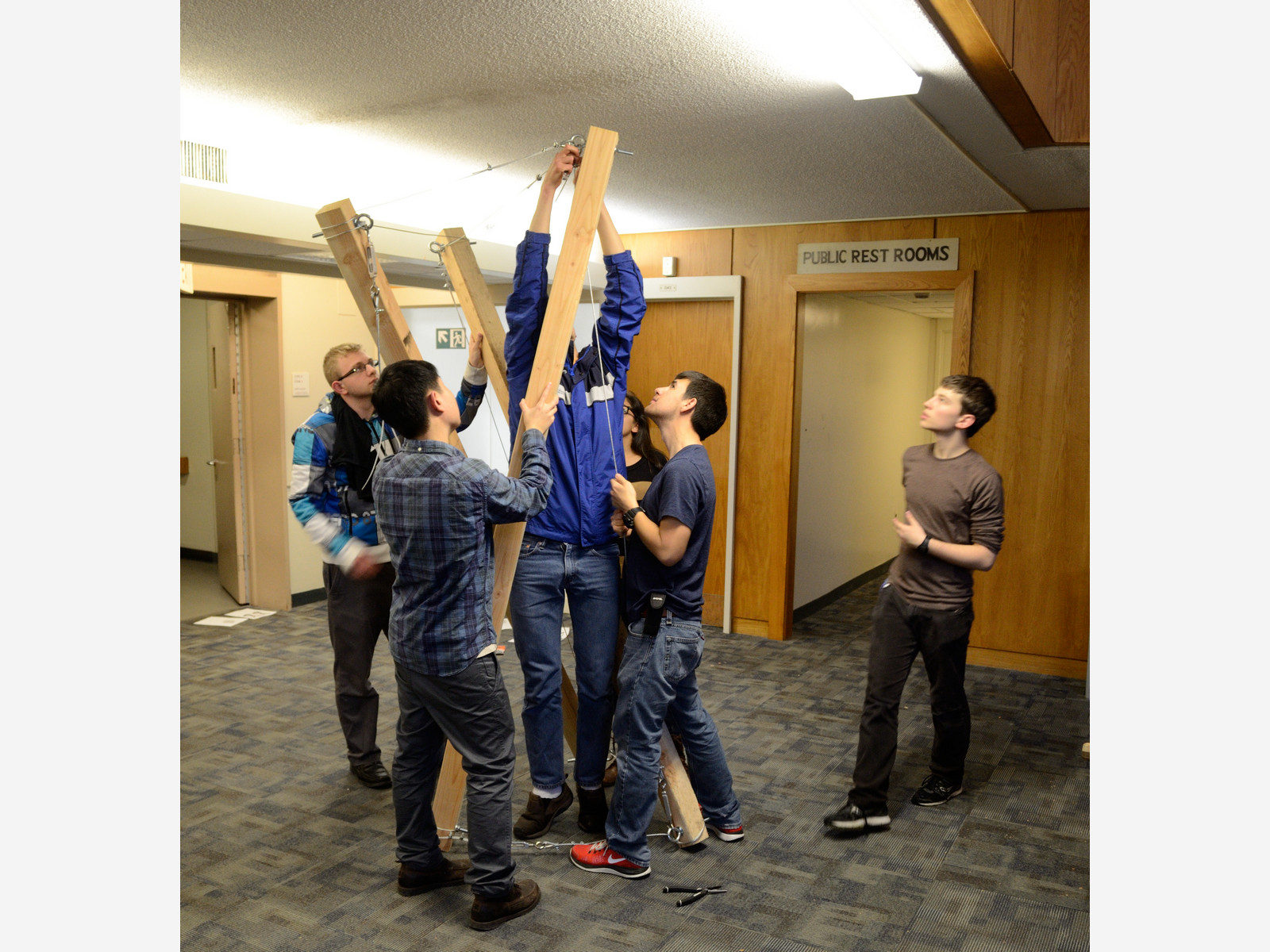 Freshman did most of the work building! 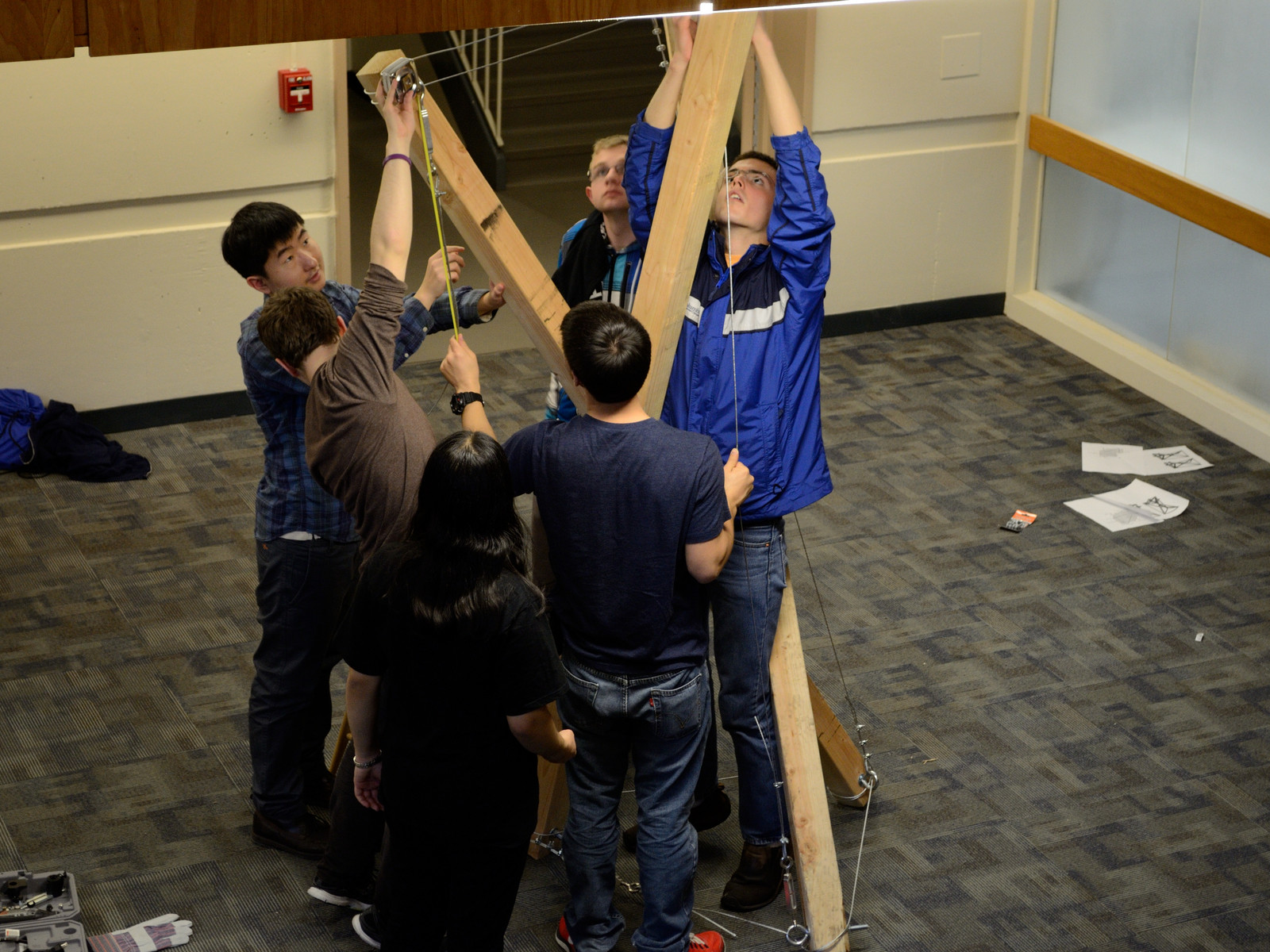 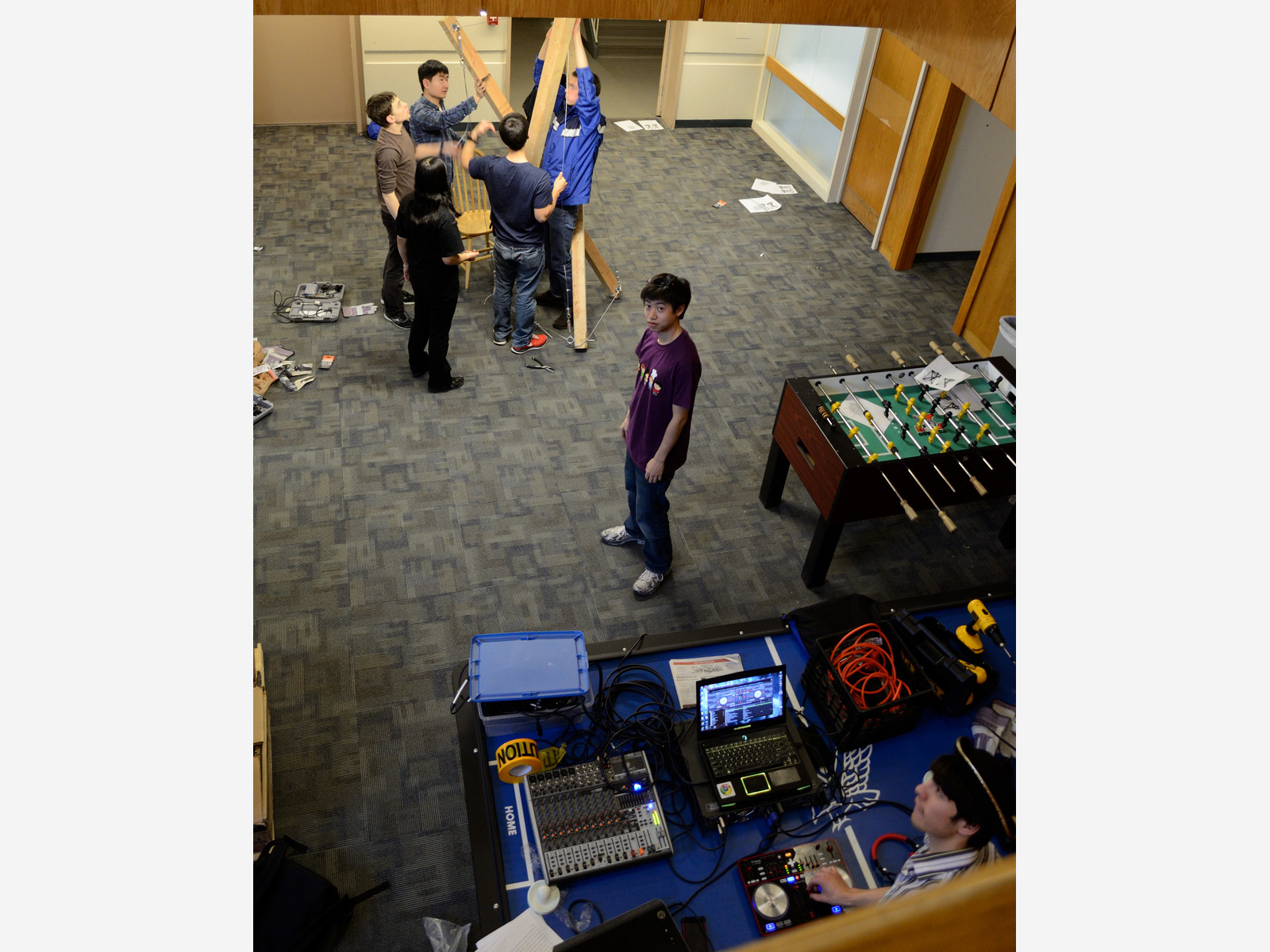 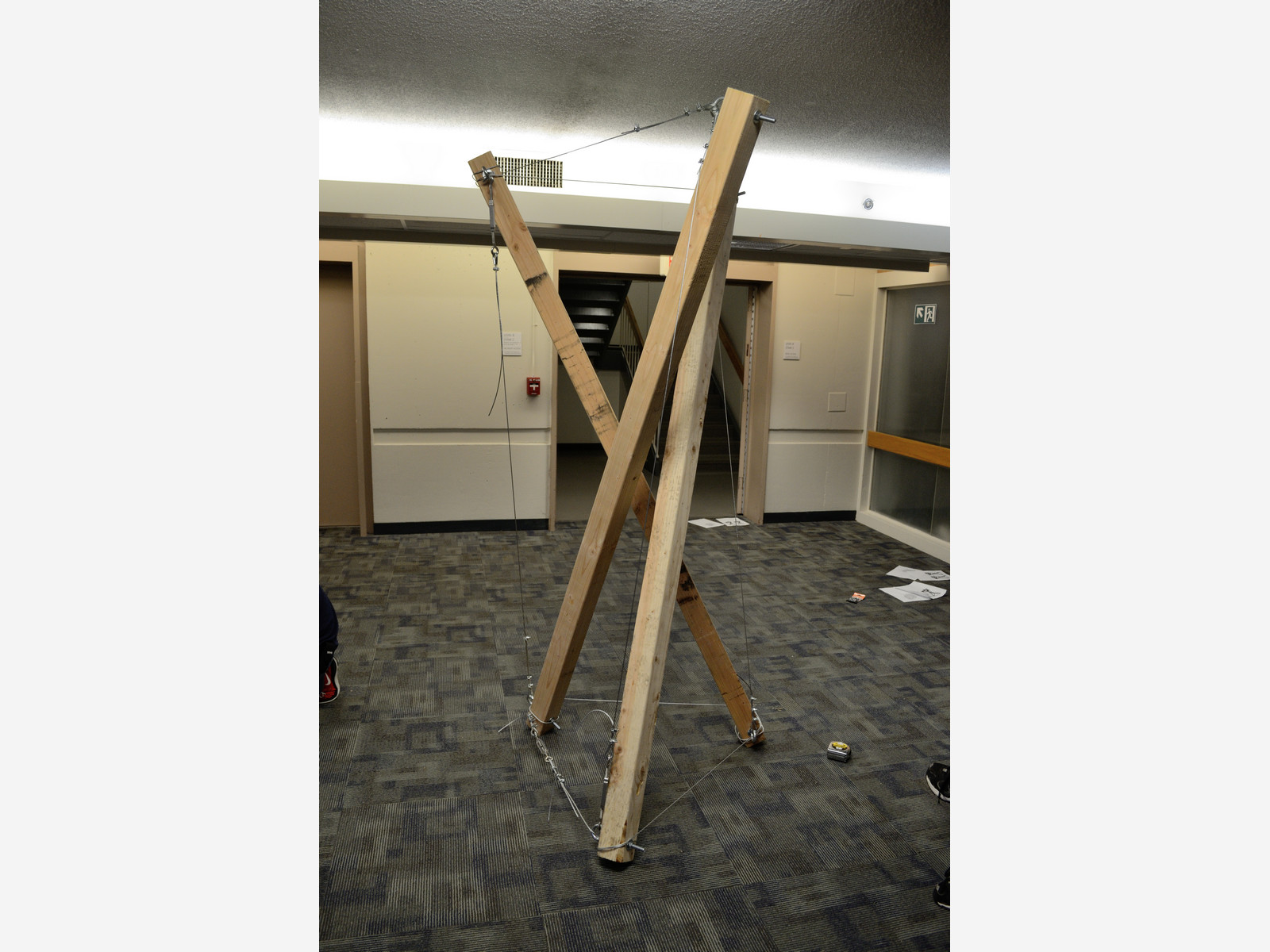 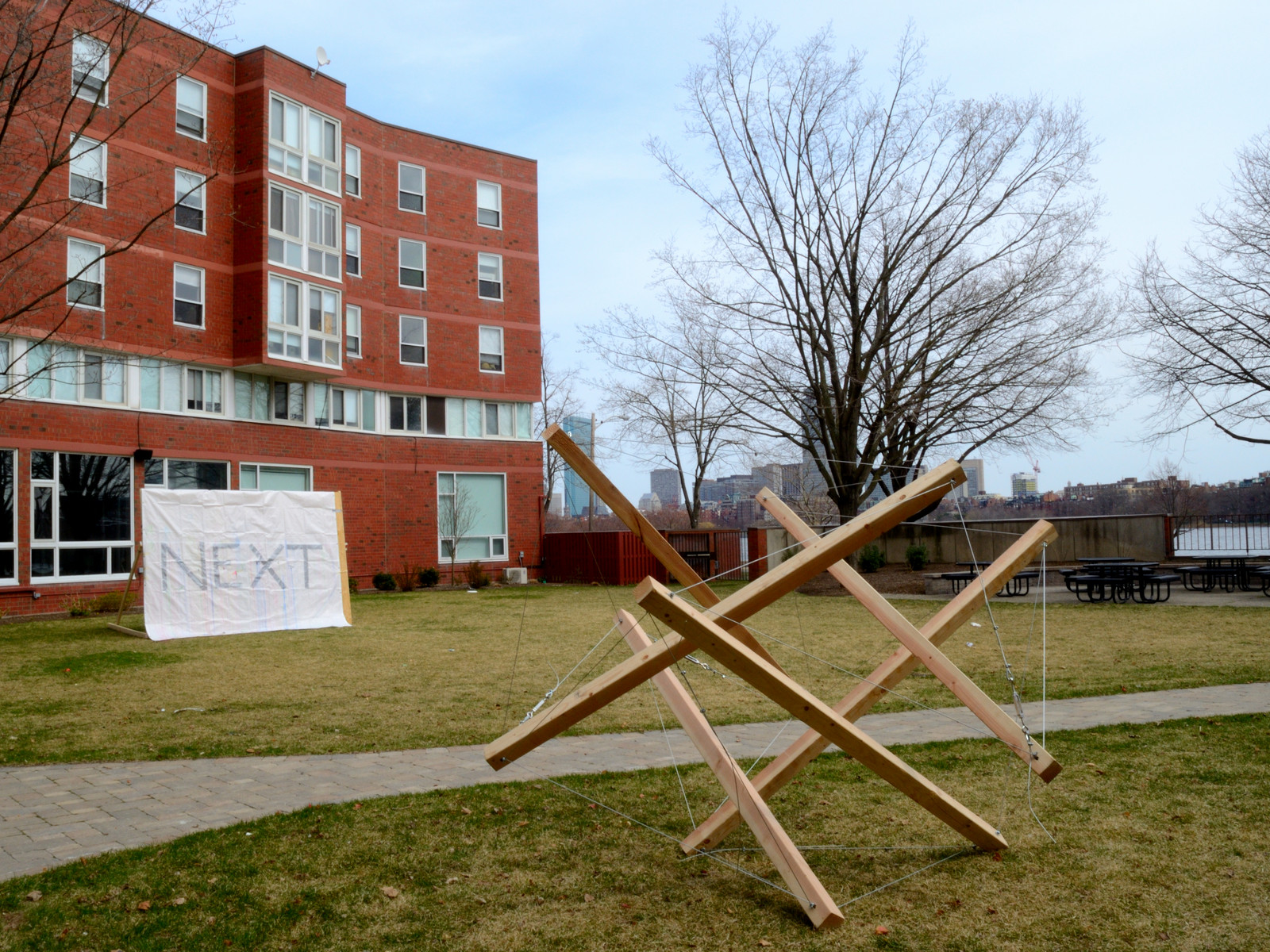 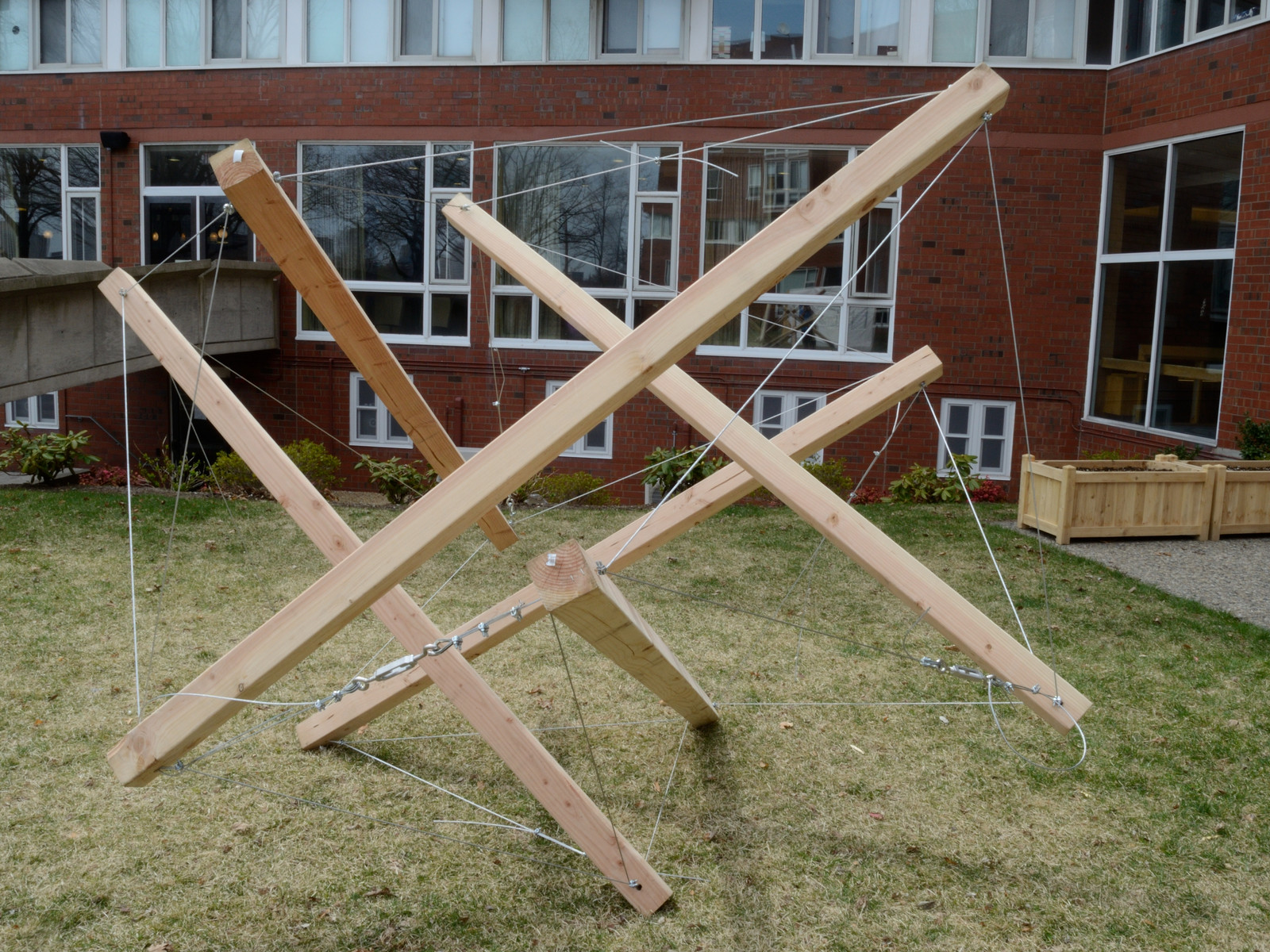 Itching to make something cheap but visually and physically interesting for MIT CPW 2013, I searched for a solution. I recalled a structure I had seen that used rope and beams to form a free standing sculpture of sorts. The internet kindly gave up the answer: the structure was an example of tensegrity, or tensional integrity.

This is a class of structures made of beams which are stabilized only through tension elements that string everything together. They are curious because, properly designed, a force applied anywhere in any direction can only result in increasing tension. The structure seems to lock down instead of displacing/moving/bending/falling over! 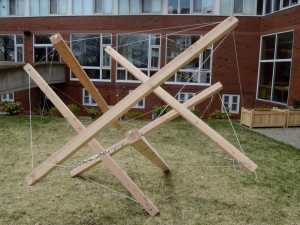 A fine example of Cubic Tensegrity! Imagine a cube wedged in the very center, so every face was against a beam.

Designs can be tesselated to create towers or benches, but I figured it would be cooler to make a couple kinds. There are several simple shapes a tensegrity sculpture can take, I chose two for the prefrosh to try and assemble. One looks like three chopsticks tied together, and would be the fall-back “easy” one. The other has a beam across each face of an imaginary cube at its center, and is far more elegant of a structure.

On the day, we successfully completed the chopstick sculpture! A large number of prefrosh were interested and helped, making it a great team building and meet-new-people event. We finished it with time to spare and so moved on to the cubic sculpture. This one was a monster, and proved too tedious to tension/retension before people wanted to move on to a different event.

Fear not though, because in a style I’ve found to be typical here, we ended up finishing it at about 02:00. Never ones to leave something that close unfinished, we headed out to the courtyard with a mostly dismantled sculpture and started over. When Next House woke up in the morning, they found a magnificent example of tensegrity in the courtyard. It stayed up all through the summer, until we had bigger plans for the courtyard.